This park was established with a objective of protecting the ecosystem and conserving the habitat of many wild animals. About 70% of the park is covered with green vegetation. There are 839 species of flora which includes 173 vascular plants species. There are 642 faunal species in Bardiya National Park which includes 125 species of fish, 23 species of reptiles, and 53 mammals. One-horned rhino, Indian leopard, Bengal tiger, rusty-spotted cat, etc are found here. There are 407 species of birds including Bengal florican, white-rumped vulture, bar-headed geese, etc.

Things to do during Bardiya National park tour

Jungle walk- jungle walk is one of the adventurous and thrilling activities to do during Bardiya National Park tour. During this walk, you can pass through the dense forest towards the bank of the Karnali River and around the natural habitats of wild animals. However, you need at least one other trekker and a licensed guide. Weapons or any kind of harmful stuff are not allowed during the walk. Guides take the tourist for a 5 to 10km walk where trekkers can encounter many elephants, rhinos, birds, and deer. You can’t make unnecessary noises during the jungle walk. Jungle walk might cost you 1500-4000 depending on the half or full-day tour.

Jeep safari is one the best way to explore the jungle and witness many animals and plants. During this safari, you will be sitting on the back of the open jeep and the driver will be showing you different spots and animals. There is also a guide provided who will guide you with directions, give information about the plants and animals, and try to spot as many animals as they can. There are basically two options available for a jeep safari. One is a half-day tour which is 4 hours long.

You will be sitting with 7 other people in a jeep and exploring the jungle. And the other option is a full-day tour that is 10 hours long. Here, you will have more comfortable cars and seats. In this full-day tour, you will go more deeply into the jungle and probably witness tigers. You can’t leave the jeep and walk around during jeep safari tour. Also, you need to show your national park permit in different places so it is best to keep it safe. A half-day jeep safari tour costs 180$+ National Park permit. And a full day jeep safari tour costs 240$+National Park permit.

Tharus are indigenous people of Bardiya National park. Tharu museum offers us the chance to witness some traditional houses and lifestyles of Tharu people. Their unique culture, languages, dresses, small houses, are something you do not want to miss during this tour.

Besides these, there are also many breeding centers, villages, and river boating available in Bardiya National Park. Basically, it is one of the most explored destinations of Nepal which combines, nature, diverse culture, religious values, wildlife, and adventurous features. 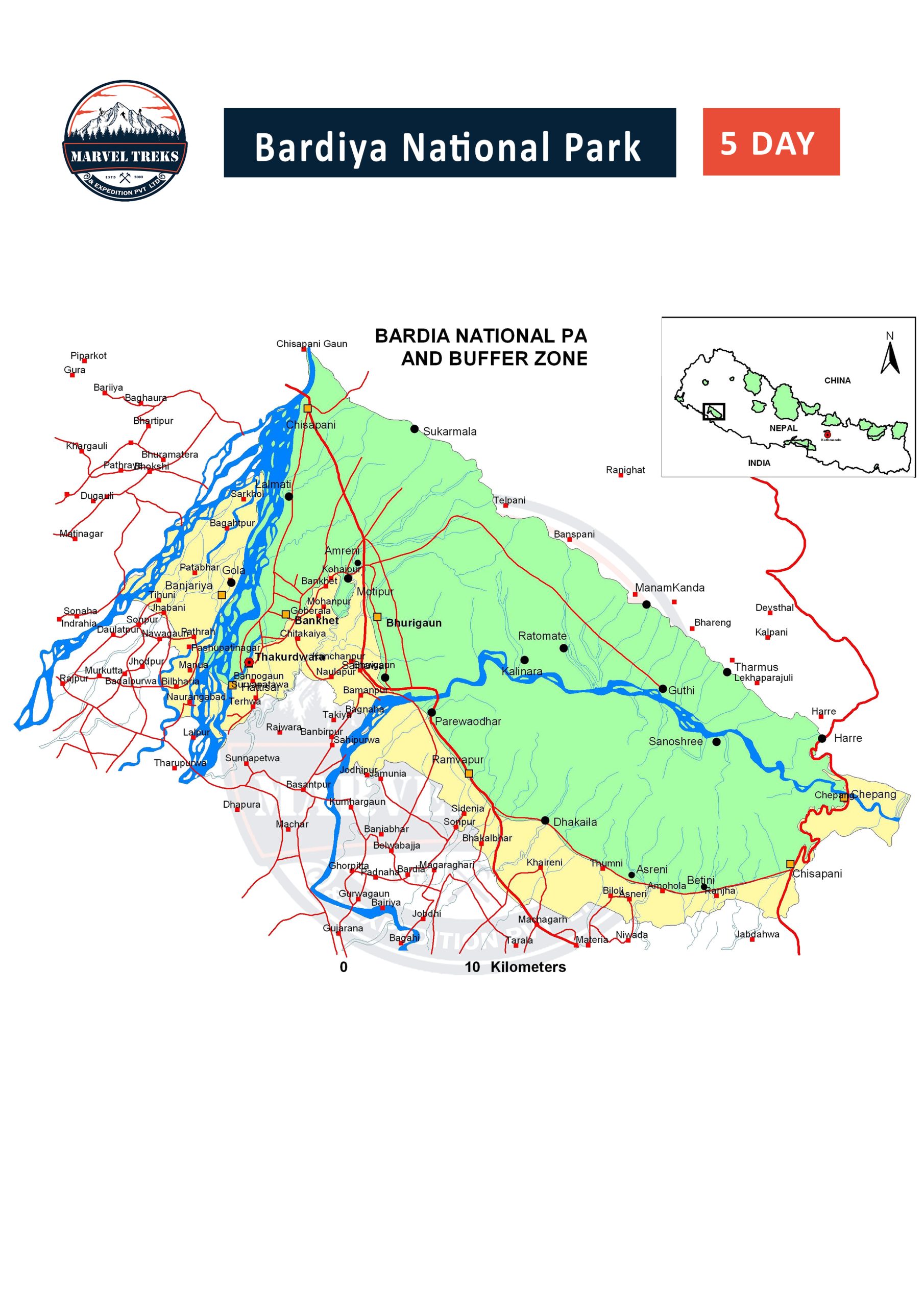 Temperature and weather
The average temperature in Bardiya National Park in summer (June-August) during the daytime ranges from 33-37⁰C and can fall slightly to 24-26⁰C. In the spring season (March-May) the average daytime temperature can range from 31-39⁰C and the nighttime is around 15-20⁰C. In the autumn season (September-November) the average daytime temperature is around 28-33⁰C and the nighttime is around 13-24⁰C. In the winter season (December- February) the daytime temperature is around 22-25⁰C and that of the night is around 8-10⁰C . Bardiya National Park is basically hot and dry throughout the year. May is the hottest month while January is the coldest of all. The best time to visit Bardiya National park is in summer. Since the weather is very hot, many wild animals roam outside to seek water and you get to witness them.
Food and accommodation
there are a number of teahouses or big-budget hotels and lodges in Bardiya. However, any kind of accommodation is not allowed and not available inside the park area. The lodges provide every kind of facilities like internet, hygienic food, 24-hour electricity, and running water. The rooms are nice with attached bathrooms. Varieties of food are available in the restaurant of the lodges like Dal, Bhat, vegetables, pizza, pasta, momo, and other western food along with tea, coffee, and other drinks. The average price for lodges there is 4-5$.
Permit
Permits for Bardiya National Park entry NON-SAARC countries- 1500 NRS (15$) SAARC countries- 750 NRS (7.5$) Nepalese- 100 NRS.
Guides and porters
guides are not only necessary but a mandatory thing for this tour. There is no entry without a licensed guide. Guides have enough knowledge about the animals, spots, and plants with their importance and specialty.
Safety and security
it is important to remember that Bardiya National Park is very rich in wild animals. There is always a risk involved in this tour. Few number attacks have been recorded in this national park. During your tour, you need to remain silent and avoid unnecessary noises. Also, wearing bright clothes is not suggested as they scare the animals. Frequent short breaks, walking alone, off-beat routes, and bathing in the rivers, are not allowed in this tour. Harmful equipment like guns, knives are strictly prohibited and given severe punishment if found so.

Price W/O Addons: US$ per person